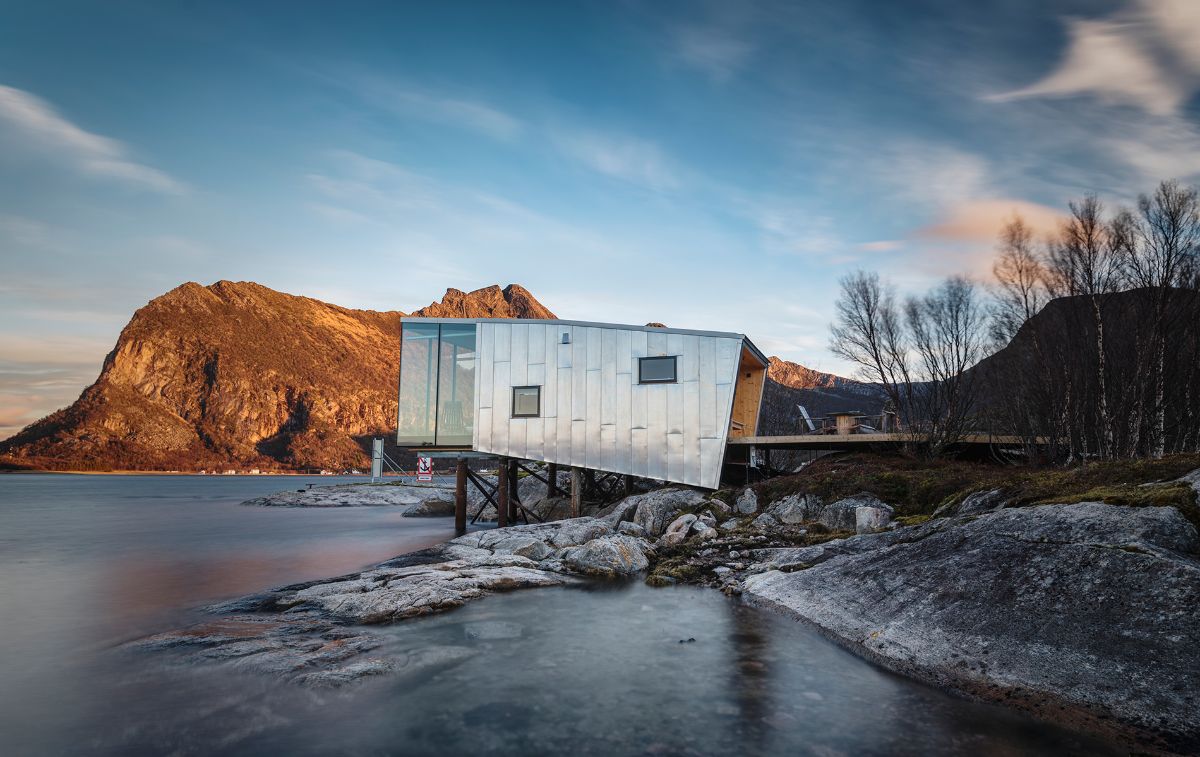 The term “cabin porn” is ugly but ultimately innocuous. It's also an accurate, albeit cynical, summary of the way in which a certain form of rural real estate is presented; seemingly real but actually faked, a fantasy world that’s out of reach. The cabin in the woods is a trope of many genres, from the inspirational isolation of literature, to the off-the-grid ethos of counter-culture or even the lonely last stand of the horror film. Perhaps the most common depiction of cabins for contemporary eyes is as an aspirational natural retreat, an outpost that protects from consumer culture overload and symbolises simplicity, purity and a return to the land.

We are deluding ourselves. At some point in the past few decades, the sparkling modernism of our imaginations diverted itself from social justice and equality and turned inwards, becoming focused on the splendid isolation of the individual above all else. The cabin in the woods is the epitome of this process. The term “cabin porn” got its first major search engine spike in the Autumn of 2011, a year or so after the tech entrepreneur Zach Klein and a group of like-minded friends acquired a 50-acre site about 90 miles north of New York City, a wooded plot that was owned by the fashion designer Scott Newkirk and already occupied by his own ‘rough-hewn’ cabin for going out of town and off the grid. Klein created Beaver Brook, a community of like-minded friends that spliced backwoods chic with a penchant for minimal, angular wooden forms, and then registered the domain name cabinporn.com.

“Where Tiny Houses and Big Dreams Grow” the New York Times noted approvingly in 2015, drawing a direct line between Klein and his companions’ yearning for meticulously fashionable solitude and the writings of Sixties’ self-sufficiency gurus like Stewart Brand and John Seymour. And it’s true, there are countless antecedents to the aesthetic, from the geometric wooden cabins that scattered the shores of Fire Island and the Hamptons in the ‘60s and ‘70s to the ad-hoc, community-driven residential architecture of Canadian architect Brian Mackay-Lyons.

Klein translated this part-time lifestyle into first a website, then a book. A fully-fledged trend emerged, and the lascivious images of silvan, mossy retreats that had at least hinted at the grungy and undeniably physical work of wilderness community building gave way to glossier, less monastic and more aspirational images. There have been many, many imitators, in addition to those who sought to create aesthetic utopias of their own. For the rest of us, this was architecture as a perpetual dream, unattainable and unrealistic but somehow a more authentic object of desire than conventional consumerist fantasies.

At some point the sparkling modernism of our imaginations diverted itself from social justice and equality and turned inwards, becoming focused on the splendid isolation of the individual.

One could argue that the collective penchant for cabin porn fed back into architecture itself, particularly hospitality design, where the off-grid, wilderness experience could be served up in affordable nightly chunks. These schemes have proliferated since mid-decade, helped by their innate instagrammability. From the Treehotel in Northern Sweden, started in 2009, to Tom Kundig’s Rolling Huts in Washington State, to the Juvet Landscape Hotel and Manshausen Island Resort in Norway, to the studied minimalism of Living Architecture's upscale vacation homes in the UK, to countless other examples of high-design, single occupancy serviced spaces, this blend of aesthetically driven pseudo-asceticism has taken hold of the architectural imagination. We can’t all stay in treehouse hotels or blackened wood wilderness cabins, let alone actually live. But we can dream. The closely related subcultures of the Vanlife bloggers and Tiny House fetishists serve up even more helpings of fantasy, carefully curated and filtered to bolster the link between aesthetics, authenticity and escapism.

The feedback loop between the increasingly visual and visible culture of architecture and the real built environment has tightened thanks to the internet; our aspirations have never been higher, our realities ever more unrelated – witness the perpetually unattainable idea of the affordable modernist prefab. Instead, we’re given the chance to consume this lifestyle in bite-size chunks, parcelled up and presented in the modern way, through social media. Brands are moving into this sphere. The splendid isolation of a “tiny home in the Swiss Alps”, a woodland grove of hip retreats, or even a car-top camper concept, cabin fever has gripped the imagination. While they might make for a memorable vacation, they're also a canny way of marketing. The most overt branded examples are pitched at GoPro-equipped influencers, preferably attractive, young and sporty, who can use their arsenal of phones, cameras and drones to capture their cabin experience for the benefits of their hundreds of thousands of followers. Meals are artfully arranged, framed by spectacular valley views or with a backdrop of a shimmering waterfall or a tangled wood, for us to admire, envy and aspire to. It is wilderness by proxy, Thoreau for the agoraphobic.

Three decades ago, authentically post-Walden isolation was the domain of eccentrics and outsiders. No longer. Cabin culture’s authenticity is manufactured but still hugely powerful, an artfully contrived retreat from modernity that is paradoxically driven by technology and underpinned by the forms and processes of contemporary design.